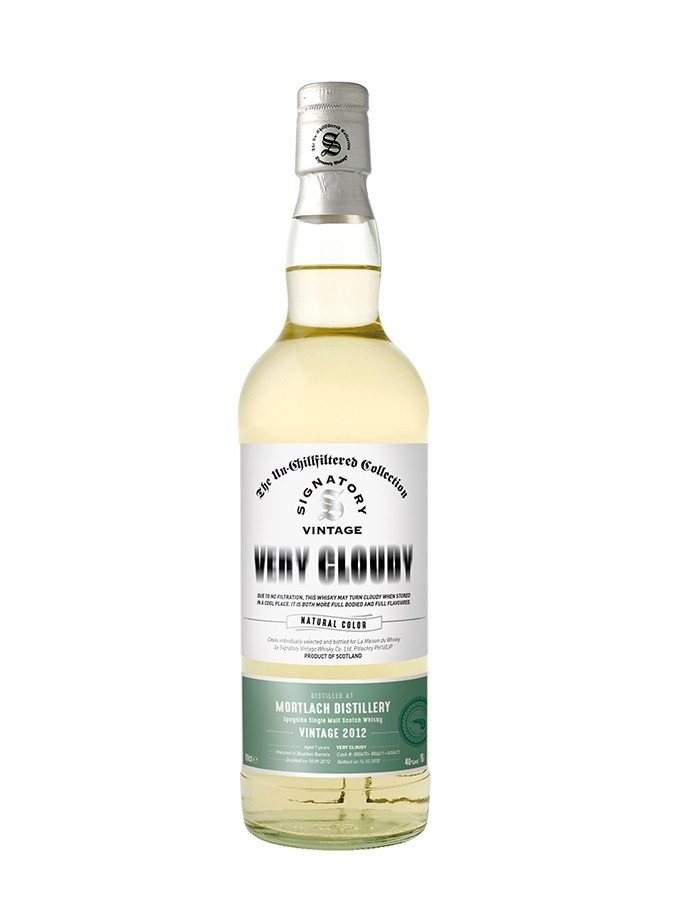 Founded in 1823, Mortlach is one of the very few distilleries that practise partial triple distillation (2.81 times exactly). It uses old-fashioned condensers known as “worm tubes” and is noted for producing a very delicate distillate with a rich and fruity profile. Distilled in 2012, this version has been aged exclusively in ex-bourbon casks that impart sweet, spicy notes. Like the Un-Chillfiltered Collection, the whiskies in the Very Cloudy range are bottled in small batches of 2 to 5 casks. Reduced to 40% without either chill filtering or colouring, they have a rich, intensely aromatic character and slightly cloudy appearance. For an authentic tasting experience, they can be enjoyed either at room temperature or lightly chilled to accentuate their oily nature. The Very Cloudy range is exclusive to La Maison du Whisky.

THE BRAND
Founded in 1823, Mortlach is allegedly built on the site of a former illicit distillery. It was one of the rare distilleries allowed to produce alcohol during the second world war, right up until 1944. Using partial triple distillation and a traditional worm tube condensation system  also used by Talisker and Edradour  Mortlach produces a very delicate distillate. As is the case with many of the distilleries owned by the Diageo group, very few official bottlings of the malt exist outside of the Flora & Fauna and Rare Malts ranges released in the 1990s.