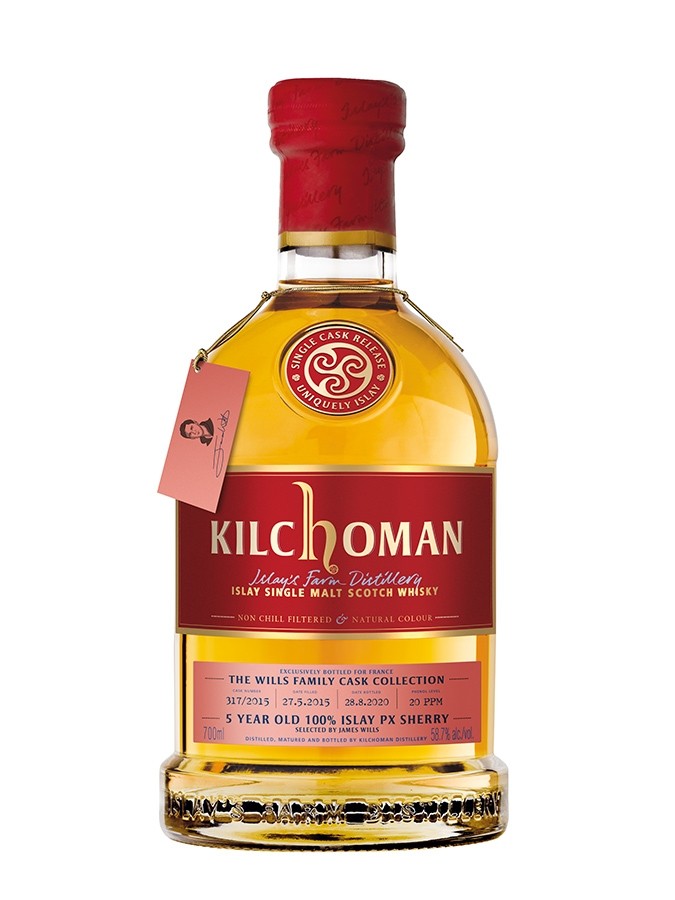 Produced from a barley grown locally at the Rockside farm which was then malted and peated (20 ppm) at the distillery, this version aged in an ex-Pedro Ximenez sherry cask was distilled on 25 May 2015. It was selected by Anthony and Kathy Wills second son, James. Very closely interconnected, the stages in the tasting create a compact and extremely concentrated block in which peat is dedicated entirely to serving the other ingredients of the flavour and aroma palette. In the climax, the empty glass evokes the distillerys kiln in which grains of malted barley become smoky and peaty. If we had to describe this Kilchoman in just two words they would be creamy firmness.

NOSE
Creamy yet lively. Characterized by superb notes of candied lemon and pineapple, the first nose is also delicately peaty and smoky. At this stage in the tasting, the Pedro Ximenez sherry dominates slightly. Allowed to breathe, the entrance of malted barley grains and camphor pushes the aromatic palette to a more earthy, salty and iodine (seaweed, kelp) register. With time, strong spices (clove, nutmeg) appear alongside wonderfully ripe Williams pear. Superb.

PALATE
Taut, elegant. Mentholated, liquorice, roasted (coffee) and lemony, the attack also reveals a translucent peat that develops notes of cereal and toffee. On the mid-palate, acacia and lavender honeys, heady florals (lily, carnation) and iris butter take it in turns to enrich the very bright palette of flavours. Full of freshness, the end of the palate is herbaceous (lime blossom, camomile) and resinous (pine, ginger).

FINISH
Long, silky. With an incredibly silky texture, the start of the finish is characterized by notes of rice cake and vanilla flan. During this rich evolution, the peat becomes more present. It is dressed in delicious liquorice, menthol, medicinal and spicy tones. On the retro-nasal olfaction, parsley, coriander and dill feed the lush end of the palate.