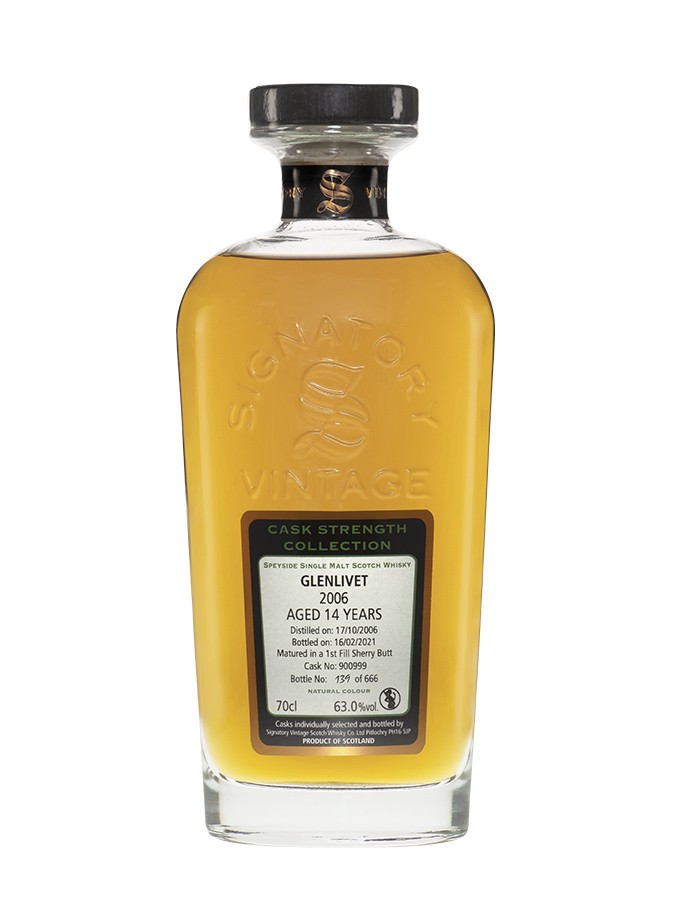 This Glenlivet, distilled in 2006, was aged in first fill sherry butt and has a rich, complex profile. The Cask Strength Collection is perhaps one of the most iconic of Signatory Vintage’s ranges, featuring single malts and single grains bottled at their natural strength. Each whisky is bottled without reduction, coloring or chill filtration, and most often from a single cask. Signatory Vintage chooses transparency and indicates on the labels all the details of the production: distillery, region, date of distillation and bottling, type of cask used and number of bottles produced. A selection of quality products that will delight lovers in search of whiskies with character.

THE BRAND
Dubbed simply The Glenlivet, a name which at the time represented a region extremely well-loved for the quality of its whiskies, this distillery was first granted its licence in 1824. Seen as an act of bravery for some and an act of betrayal for others, this allowed it to get a step ahead of the other distilleries in operation. Today one of the most prominent distilleries in Scotland, its single malt is known throughout the world. Mainly matured in ex-bourbon casks, The Glenlivet has a fresh and spring-like character marked by citrus and floral notes. Bottlings aged entirely in sherry casks can only be found through independent bottlers such as Gordon & MacPhail.

MERCHANT
Although the independent bottler Signatory Vintage cannot claim to be one of the oldest in Scotland, it has managed to build up an extremely solid reputation amongst the great malt connoisseurs. The creator of the famous range The Prestonfield and many other well-known ranges, it is best known for its un-chillfiltered and cask strength bottlings that offer amateurs the chance to enjoy their whisky in its most natural form. It was also one of the first independent bottlers to acquire a distillery and now offers a growing number of expressions of one of the most artisan single malts available.

THE LINE
The Cask Strength Collection of single malt and single grain whiskies is without doubt one of the most appreciated ranges. Each release is bottled undiluted, unchillfiltered and usually consists of a single cask. To help the consumer appreciate their whisky at more than a purely aromatic and gustatory level, Signatory Vintage takes care to display on each label, with great precision, the region of production, the date of distillation and bottling, the type of cask used, its number and the number of bottles of the same nectar that were produced. This range thus offers some fascinating facts, in addition to exceptional quality!